is aimed at helping developing teams provide game time to new players. This year, along with four local based teams, there were 2 London based teams, one from Hertfordshire and one from Eastbourne. The first half of the day saw the 8 teams compete in

a round-robin format and from the first games it was clear the days front runners would be PSL All-Stars and RG Blue Sox. Both completed their group stage program undefeated and thus avoided each other in the Cup Semi-finals. London based Hotel team COMO, secured the third Cup semi-final space with a win in their second game and would meet the Blue Sox, while the final Cup Semi-final place would be settled by a local derby between Bracknell Scorchers and TV Hurricanes. Scorchers won that encounter to set up a game against the All-Stars. The Plate competition saw Maidenhead’s own Rascals team face Herts Buzzards in the first semi-final. After a tough start for the Rascals, they finished the group stages with a draw against the Eastbourne Bombers. The Cup semi-finals saw the local teams fair very differently. The Scorchers found the All-Stars too strong and went down 30-1, the Blue Sox had a much tighter encounter and just overcame COMO 12-11 to set up the final that looked on the cards from the start. The Plate semi-finals saw both local teams overcome their oppositions, Rascals 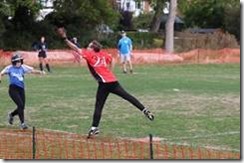 beating Buzzards 21-9, Hurricanes beating Bombers 14-2. The Rascals have been perennial Plate finalist over the 6 years of the competitions, but have consistently fallen short, and 2018 was another instance of that as the Hurricanes, who only just missed out on the Cup competition, winning 18-8. The Cup final was an encounter that was a fitting end to the day, both teams unbeaten on the day and both playing well. The was also a first appearance in the Cup final for both teams, the All-Stars had been Plate runners-up last year. This year, they took the next step to Cup winners as they squeezed past the Blue Sox 12-9. The standard of play and popularity of the event have gone from strength to strength over the past 6 years and looks to continue next year, now with a new winner’s name on the Roll of Honour. For more information about Softball and how to get involved in the Maidenhead area contact MSC on maidenheadsoftballclub@outlook.com.